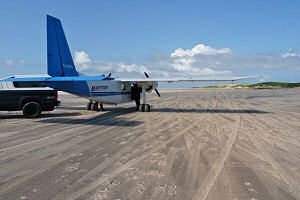 Maritime Air, the air charter company who flies to Sable Island, uses a Britten-Norman Islander. The "islander" is a special plane designed for short landing and take off.

I had the good fortune of being invited to go to Sable Island last summer. I traveled there with 2 photographers and my friend Dr. Claudia Notzke who studies wild horses around the world. We were approved to go to Sable from Monday, Aug. 3 through Monday, Aug. 10th. However, being approved doesn't mean you will get there. Sable Island is known as the foggiest place in Nova Scotia and the fog dictates if and when the plane will land.

We were delayed 5 out of our 7 days and were still sitting in Halifax (on pins and needles) waiting for the fog to break long enough for the plane to fly in. On Saturday morning we finally got the "go ahead" and although that left us with only 2 days, we had come too far not to follow through (a visit cannot be extended or changed due to weather). So it was with great jubilation that we finally loaded the plane and took off! 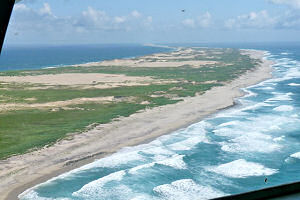 Our first view...
Sable Island is approx. 180 km off the coast of Nova Scotia. It took almost 2 hours to fly there from Halifax.

As the day was clear, our pilot offered to fly over the northern tip of Sable Island. The island is 42 km long and about 1 1/2 km at its widest. 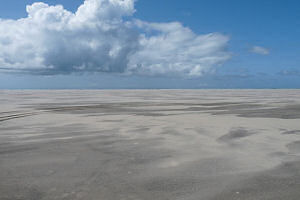 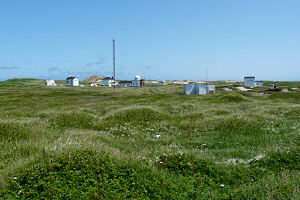 Downtown Sable Island is comprised of 2 residences (one for station manager Gerry Forbes and the other for visitors and island maintenance staff), the weather office and service buildings. 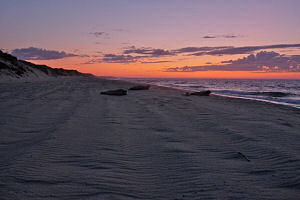 My first evening on the island has left an indelible memory...Just imagine being alone (well almost) on an island far from anywhere, on a warm summer evening...nothing around you except the horses and seals and the sound of the wind and surf...absolutely heaven...

This particular moment in time will stay with me for the rest of my life. I can still feel the serenity wash over me. 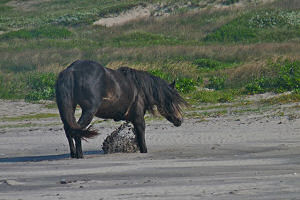 Quicksand!!! I had heard there was pockets of quicksand on the island but didn't pay too much attention until I saw this young stallion sink into it. Fortunately it didn't appear too deep and he was able to extract himself. I couldn't resist checking it though, so I wandered over (carefully) but after I started to sink past the edge of my hiking boots, I exited very quickly to firmer ground. I was alone (no one to pull me out) and had seen entirely too many Tarzan movies as a youngster. 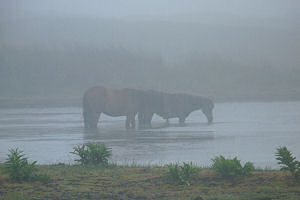 After 2 days of blissful sunshine we were not unhappy to have a change of climate. Aside from giving us a clearer picture of what life on the island is really like, the fog also delayed our departure and gave us another 2 days on the island. 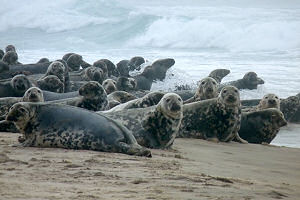 Sable Island is home to large populations of Harbour and Grey Seals. 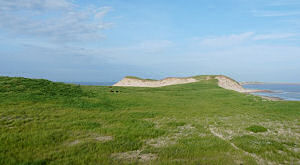 I fell in love with this particular great long sweeping vista. The water on the right is a huge fresh water lake...not the ocean. 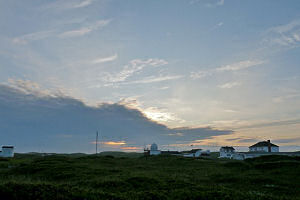 The station on our last evening. Unfortunately the fog bank lifted and it looked clear for our departure the next day.

My time on Sable Island, although short, has been life altering. Even after almost one year I can still feel its magnetic pull.

Although Sable Island and all of its inhabitants have enjoyed government protected status since 1961, its future is in doubt. I urge everyone to visit the website created by Zoe Lucas who has lived on Sable Island for over 20 years. For more information please visit: www.greenhorsesociety.com 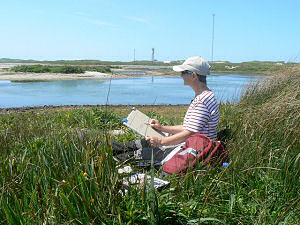 Sketching. I came prepared for seven days of painting but because our time on the island was shortened so much, after the first day I decided to just walk and photograph and experience as much of the island as I could in the few days I would have. 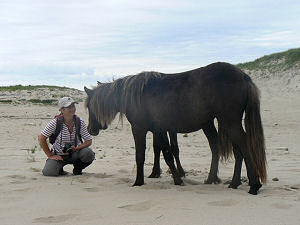 Nose to nose with a couple of inquisitive youngsters. Although wary, for the most part, the older horses ignored us but the curious younger horses eventually had to get closer to examine us. As long as we maintained a non-threatening stance, they would approach cautiously. 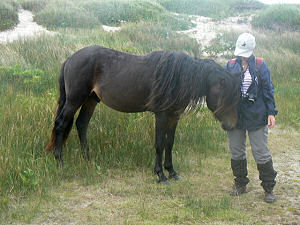 Boyfriend and me. I dubbed this young stallion "Boyfriend." I followed him and then he followed me over the course of two days. On the first day after I had been following him and his family for about an hour, he approached me. He allowed himself to be touched and decided that he rather enjoyed the scratches. On the second day when I was out walking with Claudia, I chanced upon him again. Upon seeing me he came directly to me without any hesitation and offered himself for a scratch. As Claudia and I started to walk away, he followed at my side and then started to push against me, directing me away from Claudia. I think he decided that I would be a good addition to his harem. I was flattered but declined. I didn't see Boyfriend again, but I remember him with great fondness. 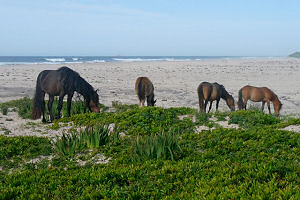 Boyfriend and his family. 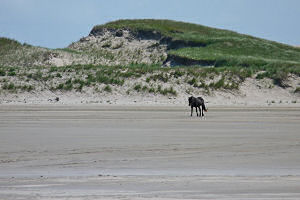 Our welcoming committee just after we landed. 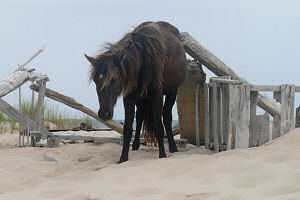 Itchy! There isn't a rock or a tree on Sable Island for the horses to use as an itching post. All of the buildings are fenced to protect them from the horses but remnants of previous buildings and shipwrecks are common on the island and are creatively utilized by the horses. 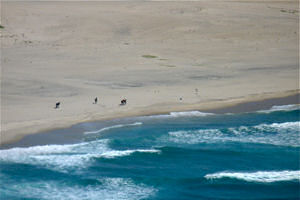 Horses on the beach 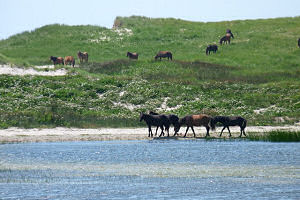 There is always lots of activity at the fresh water ponds where the horses congregate. 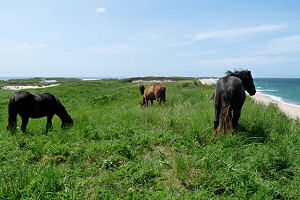 Contact the artist to inquire about purchasing an original painting, print, or gift item.
Click the cart icon below to go to the Checkout page.